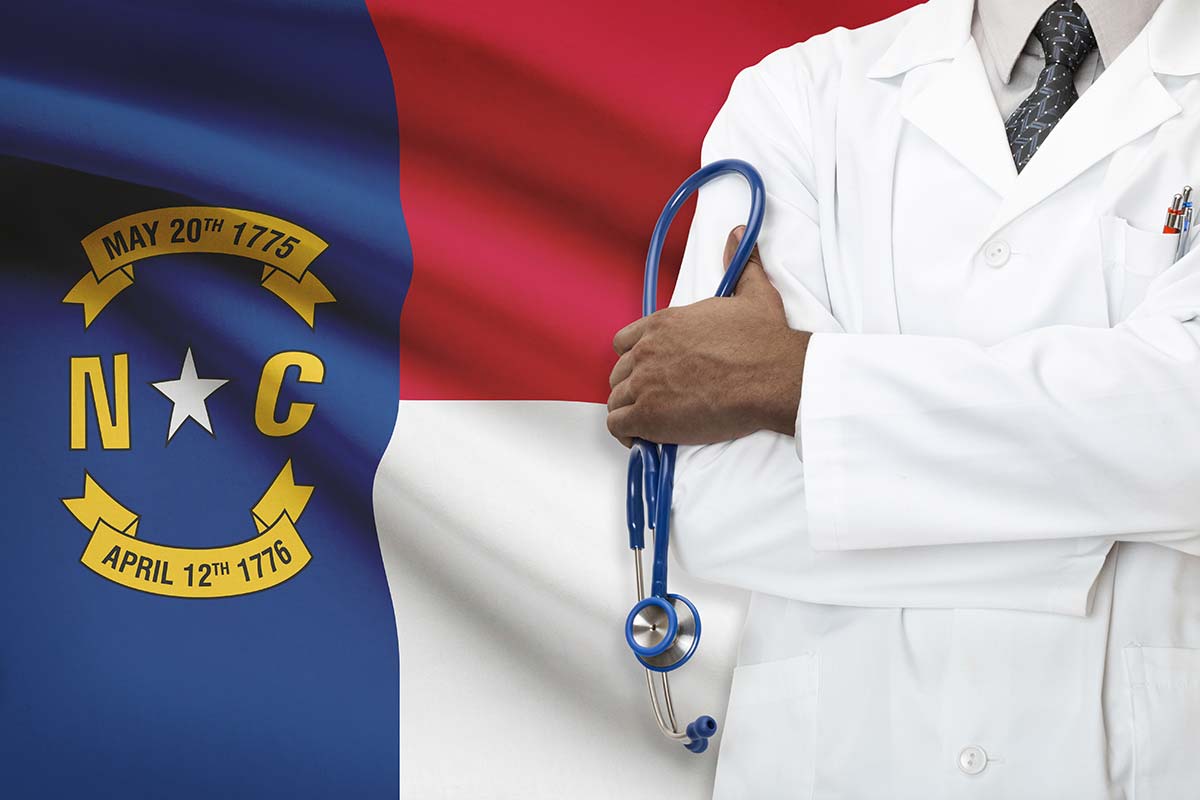 Doctors in North Carolina have several good options for medical liability insurance. The best insurers in the state are:

These carriers use proprietary methodologies to set rates and there is no set standard rate across insurers for each specialty. However, North Carolina physicians tend to buy policies with $1,000,000 a claim/$3,000,000 aggregate per year in coverage.

Like other states across the country, in the mid-nineties to the early 2000s malpractice rates skyrocketed in the state of North Carolina, with numerous specialties witnessing enormous increases in liability rates. Since 2003, many carriers have joined the market, the average claim payment has decreased, rates have stabilized, and the frequency of malpractice claims has steadily decreased.

Good doctors need to protect against the possibility of a medical malpractice lawsuit. Even though physicians win most malpractice cases, the legal system seldom allows the winner to recover expenses. Because providers can spend exorbitant amounts on their legal defense and still lose a case, comprehensive medical malpractice insurance is fundamental to reducing risk in your practice.

North Carolina responded to the COVID-19 pandemic early, when Governor Roy Cooper proactively created a task force and state health department hotline on February 11, 2020. Shortly after on March 3, the state reported its first positive case. In response to the rise in cases, a statewide state at home order took effect on March 30th. Throughout the summer of 2020, restrictions on businesses and services were slowly lifted while social distancing measures remained in place.

Numbers of positive cases slowly began to swell in the state, resulting in an overnight stay at home order issued in December and in effect until early 2021. Due to the spike in positive infections, hospitals in the state are more at risk of reaching their capacity to treat patients than they have ever been. In response, the major health systems in the state have contingency plans in place that include scaling up facilities, using telemedicine to treat positive patients at home, and suspending procedures that are not time sensitive.

With the symptoms of COVID-19 varying from patient to patient, the risk of misdiagnosis is high. It is recommended that any physician practicing medicine in North Carolina during the COVID-19 public health emergency be protected by medical malpractice insurance.

North Carolina was at the beginning of increasing its fledgling telehealth services when the COVID-19 pandemic hit in 2020, but the coronavirus rapidly changed how medicine is implemented for more routine visits, effectively “plunging (providers) into the deep end of the pool”. Medical offices have switched to virtual appointments as the medical needs of the state’s residents have grown in response to the virus.

In fact, using phone or video technology to deliver care to patients has become a critical strategy in the state’s response efforts. According to policymakers, adopting telemedicine during COVID-19 in North Carolina is crucial to:

Since the adoption of telemedicine in the state, several expansions have occurred for private payors and state Medicaid, including parity payment for telephone and video appointments, expanding the types of technologies used to deliver healthcare, expanding which providers can provide and be reimbursed for telehealth, and eliminating the need for prior authorization in many cases. Specific COVID-19 changes to telemedicine rules include private payors across the state continuing to announce updates to their telehealth requirements and the state licensure board expediting licensure for out of state doctors to treat North Carolina patients.

Rates in North Carolina are moderate compared to the rest of the country, even for specialists like surgeons and obstetricians, who often carry higher limits of liability.

North Carolina was one of the first states to embrace alternative dispute resolution as an additional option to lengthy malpractice suits, which included “mediation, arbitration, a summary jury trial, and early neutral evaluation”. Alternative dispute resolution helped decrease both the cost and length of litigation in the state. A $1 million cap on total damages for medical malpractice liability claims, known as the Voluntary Arbitration of Health Care Claims Act, was passed in North Carolina in 2007 for those who enter into this type of arrangement.

Additionally, North Carolina passed a law in 2011 capping non-economic damages in most medical malpractice cases at $500,000, with the number of cases filed monthly plummeting as soon as the law went into effect. In addition to the cap, 2011’s SB 33 expanded the protection of emergency medical personnel who are providing care in emergency situations.

North Carolina does not set a cap on economic damages, but in most cases, the state requires a separate trial to determine the amount of economic damages if they are claimed to be more than $150,000. These two trials may be combined into a single trial if the judge finds good cause to do so.

In 2001, state legislation was passed that placed a $500,000 cap on non-economic damages in medical malpractice cases, indexed for inflation starting on January 1, 2014. Unlike many states that have ruled damage caps unconstitutional, this cap is still in place today. Non-economic damages include things like emotional distress, pain and suffering, depression, anxiety, and various other non-financial losses.

There are some exceptions to the cap, however. In cases where the injured party suffered disfigurement, if the patient lost the use of a body part, or death or gross negligence happened, the $500,000 cap on North Carolina’s payouts can be circumvented.

In 2007, the state passed the Voluntary Arbitration of Health Claims Act, “capping total damages at $1 million in medical professional liability claims where both parties agree to use binding arbitration”.

Guidelines about the state’s medical malpractice statute of limitation are listed below:

Doctors practicing in North Carolina that have a claims-made policy but DON’T have Prior Acts insurance (also known as Nose Coverage) need a tail insurance policy to ensure that they’re protected from malpractice claims when changing jobs. Your exposure period begins with your retroactive date (the first date of employment with your last employer) and ends on the policy cancellation date (your last day seeing patients at that job). If a claim is made after your policy expires, tail malpractice insurance will protect you. Often before you begin a new job, your new employer will want to confirm you have tail coverage from your prior job. To get the best rates on tail insurance in North Carolina, contact a broker before you notify your employer of your resignation.

Overall, North Carolina is a hospitable state for doctors. There are a variety of medical malpractice insurance carriers to choose from, leading to a stable market with an already decreasing number of filed claims. In fact, a 2015 study from the Institute of Legal Research ranked the state 7th in its fairness and reasonableness of the state liability system.

MEDPLI helps doctors from all specialties. Whether you are an anesthesiologist in Charlotte, an OB/Gyn in Raleigh, or an orthopedic surgeon in Greensboro, we can help you find medical malpractice insurance. To get coverage from an A-rated carrier, contact us by requesting a quote.